Before we tell the world how much we love using Sylius, first off we should explain what exactly Sylius is. 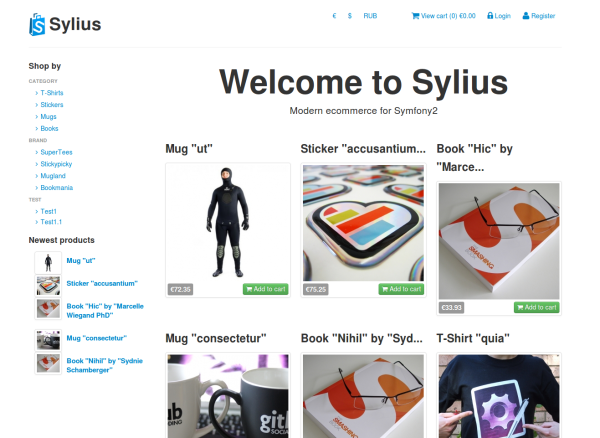 Sylius is an e-commerce platform built using the Symfony 2 framework.  It is still in it’s early days and as such it is not as feature rich as some other e-commerce platforms such as Magento, however it is getting there and does already have most of the features you would expect from an online shop.

Why we love it and you should too

Sylius is built on top of Symfony 2 and as such it is built in a much better decoupled way that other e-commerce platforms.  This makes development much more enjoyable and it allows you to easily plug in any number of thousands of Symfony 2 bundles into your project (as Sylius has already done).  As you can imagine this can speed up development time a lot.

Also Sylius has been built using BDD / TDD methodologies.  This make it great to learn from a developers perspective and it allows for faster development through automated tests.  As uncle bob says “The only way to go fast is to go well”.

With Sylius being so young, it is at a great point in its development to make some contributions.  Here and here are a couple I have made myself.  Easy once you are involved and enjoyable.  There is also plenty to get involved in with regards to new features.  Simply find the repository and get involved.

Sylius is also being used in production environments already.  One such project we have built using the framework is PrecisionCodeWorks, an e-commerce store for purchasing ECU tuning file credits.

Out of the box Sylius is also quick to setup.  If you compare it to the amounts of XML for example within Magento, it is much faster to get up and running.